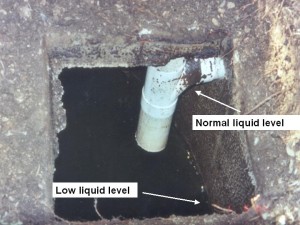 Unfortunately there are no easy-to-spot signs of a leaking septic tank; most homeowners will not know their septic tank is leaking unless it is opened and pumped out. This may be done for routine maintenance or may be done during a real-estate inspection.

Most septic tanks are installed in a top and bottom section, and it’s where these two sections meet that we most often find leaks. The seam of the tank is usually several feet below the surface of the ground, so there are usually no visual signs over or around the tank that indicate excessive moisture.

The tank should always be filled to the outlet pipe (about 8-12 inches from the top of the tank). All tanks should be watertight, so the wastewater inside should still be there several years later if the home is left unoccupied.

If a home is occupied, a leaking tank may not be detected because the occupants are constantly adding water to the system, so the liquid level may be normal when the tank is opened. However, when a house is vacant, it allows time for the liquids to seep out and a leaking tank may be more apparent.

This is found most often when a house is occupied and the liquid level appears to be normal (not low) — but as the liquids are pumped down in the tank, water starts seeping into the tank because the soil on the outside of the tank is saturated and holding water.

Although the homeowner may not experience any conventional “problems” with the system (such as a backup in the house or moisture over the yard), a leaking tank is considered an environmental hazard.

There is no guarantee that sealing a leaking tank will fix the problem (or fix it for long) — therefore it is usually recommended to replace a leaking tank. Depending on the age of the system and local regulations, replacing a septic tank may require replacing the entire system.

36 thoughts on “How Do I Know if My Septic Tank is Leaking?”