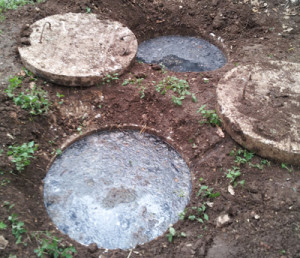 Although different septic systems work differently, there are some common problems to which they are all prone. See our latest video for some examples.

A tank should always be filled to its normal liquid level, just at the outlet pipe, or about 8 to 12 inches from the top of the tank. If the liquid level in a tank is above normal we consider it “overfull.” An overfull tank is usually a sign of a problem with the system’s absorption area. Read more about overfull tanks.

If liquid levels are lower than the outlet pipe, the tank may be leaking. Most tanks are installed in top and bottom sections, and it’s usually from the seam of those sections that tanks leak.

Tank corrosion is typically caused by a buildup of hydrogen sulfide gas. We see corrosion most often in two-compartment tanks where the dividing wall goes all the way to the top of the tank. The gas becomes trapped in the second compartment, and that’s where we find the corrosion. Learn more about spotting corrosion.

A baffle is a letter T-shaped pipe that connects to a system’s inlet and outlet pipe. The outlet baffle is meant to pull water from the middle of the tank rather than the top; if it is missing, paper and waste from the top of the tank flow directly to the drainfield and can clog the drainfield pipes. Missing or broken baffles can lead to major problems with the system.

Roots can enter tank from several places, such as the access lid of the tank, inside or around the baffles, or at the seams of the tank. Roots can also infiltrate the drainfield, causing system failure.

A tank’s dividing wall separates the tank into two compartments, keeping most of the sludge trapped in the first compartment and preventing solids from exiting the tank to the absorption area. A detached wall can trap solids in the tank, preventing them from being removed during pumping and forcing the homeowner to have the tank pumped more frequently.

All septic systems are buried underground, so the only time these problems can be uncovered is when the tank lid is open, such as during pumpings. Getting on a routine pumping schedule with a licensed provider can help prevent these and other problems with your septic system.

Need help with your septic system? Contact us online or give us a call. We’re always glad to help.