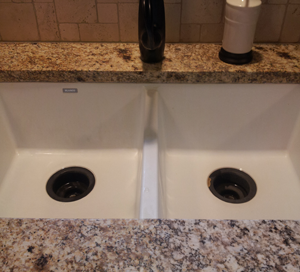 A garbage disposal is not a trash can

Most people use their garbage disposal like they would a trash can, stuffing veggie peelings, leftover food, and grease down the system. But the matter going down the disposal has to go somewhere — and when your house has a septic system, it all ends up in the septic tank.

Some of the matter can be broken down by the bacteria in the septic tank, but both the broken-down matter and un-broken-down matter accumulate over time. When we pump out a tank that has heavy garbage disposal use, it is very obvious inside the tank; often there is literally a pile of food under the inlet pipe of the tank.

Along with causing extra pumpings, a septic tank full of leftovers can overthrow your system’s bacterial balance, making it less efficient in treating wastewater. Your septic system will not function at its peak.

Do not overuse your garbage disposal

If you currently have or plan to install a garbage disposal, our best advice is to pretend it is not there. Using your disposal daily can have adverse effects on your septic system, but occasional or infrequent use lessens that potential.

Little pieces of food washed off your plate are perfectly okay to go down the drain. But if you have a large amount leftover, scrape most of the food into the trash can and then rinse the smaller remains in the sink.

Do’s and don’ts for garbage disposals on septic systems

10 thoughts on “Your Septic System, Garbage Disposal, and You”