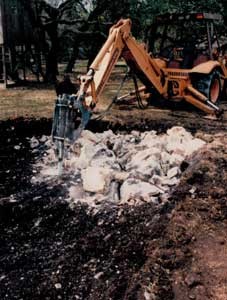 If you live in San Antonio or the Hill Country area and find yourself in need of a new septic system, chances are you may have to install an aerobic system. Septic system technology has advanced dramatically over the last 30 years. Many technological advancements have  come about from studying septic systems in various soil types and various environmental risks.

For the first 50 years of Van Delden’s operation (beginning in 1937), standard septic systems were the only septic system available and installed. A long time ago, we blasted out the all the rock in our Texas soil to install septic systems. As machinery developed, we began rock hammering. Studies eventually discovered that rock does not treat wastewater as well as soil. The effluent moves through rock quickly without benefiting from treatment that occurs in the microbes of soil, receiving much less treatment before entering the groundwater supply. In 1997, the state of Texas began requiring aerobic systems on property with heavy rock.

This picture shows a system we installed in 1996, just before regulation changes in 1997. If this system failed today, regulations would not allow another standard system to be installed due to the large amount of rock on the property. If you’re unsure which septic system best suits your home, check out the below video.

If you find yourself in need of a new system, give us a call for a free phone consultation. No one installs a more efficient aerobic system. Van Delden was the first to install an aerobic system with spray distribution in Bexar County in 1990, and our commitment to using the best quality products had led to installing, servicing, and maintaining only the Clearstream aerobic system.