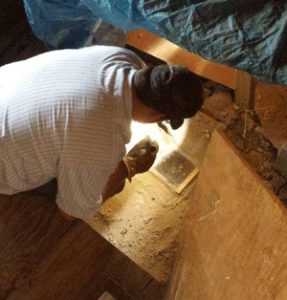 Who would build a room addition over their septic tank? More people than you might think. TCEQ regulations require a minimum of 5 feet distance from a septic tank to a foundation, building, or surface improvement, but we often come across situations where a homeowner — knowingly or not — has built something over their septic tank.

Digging through the rubble

During our most recent inspection in which we ran into this problem, the owner was a widow who did not know where the septic tank was located. Her husband installed the system himself many years ago, and later added on to the original house several times.

After using a flushable transmitter, we picked up a signal inside an enclosed rock storage room connected to the house. After removing years of clutter and large pieces of plywood we found the tank, which was mostly poured over with concrete. Only about 10% of the tank was still accessible — luckily it had a lid exposed within that area so that we could still pump and inspect the tank.

Although the septic system is still functioning, this may turn into a big issue once the system does require replacement.

Not only will the tank be difficult to abandon due to its location, the sewer line that comes into the tank is poured over with added-on foundation. The storage room has a deck built over it, so removing the store room will also mean removing a large upstairs deck, which added nice appeal and square footage to the house.

Finding your septic tank’s location may require hiring a professional, but that cost can seem like nothing to a homeowner who has just been told her septic tank is located under hundreds of pounds of concrete.