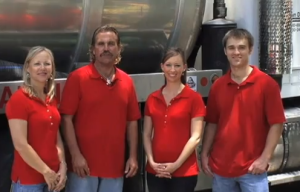 My grandfather Franz (Frank) Van Delden was born in Germany and immigrated to the United States in 1913 at the age of 27. For 13 years he traveled the country on horseback doing odd jobs—mainly painting and brick laying—then finally settled in San Antonio. In 1932 he founded Van Delden Company and began dealing in machinery and industrial supplies. Soon after, the company began machinery, erection and construction services.

Van Delden installed its first septic system in 1937. My grandfather continued building the business until his death in 1955, at which time each of his four sons took on and managed a division of the company. 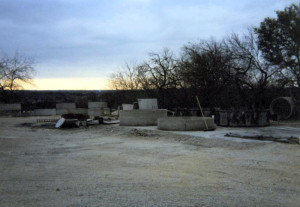 Specializing in only septic systems, the company became very successful installing residential and commercial systems. They installed hundreds of systems in subdivisions in their early development such as Shavano Park, Hollywood Park and Hill Country Village; Campbellton and Southwest high schools and other commercial projects contributed to the company’s reputation for excellence.

I began working for my father in 1978 shortly after I married my wife Pam. I started out working with the rock drilling and explosive crew — back then, blasting the rock was the method used for removal of rock for the installation of a septic system.

Then after that and a couple of years of experience installing septic systems and running one of the four installation crews, I began to help my father run all aspects of the business.

In 1982 my wife Pam began working with the company, running the office and accounting aspects of the business. There were some serious economic problems for the country during the 1980s, but with hard work and diligence we survived.

In 1989 my father semi-retired, and in 1995 my wife and I purchased the business from him. In 1998 we built a new facility on IH 10 just north of Leon Springs and moved our business there, working hard to continue our distinct excellence and reputation in the industry.

In 2003 the fourth generation of the company began when our daughter Courtney graduated from Texas A&M and decided to continue the business; in 2007 Chad our son graduated from UTSA and made the same choice. Both strive to maintain the high-quality work and reputation that the company name has represented.

Since 2005 Van Delden Wastewater Systems has been featured twice in the San Antonio Business Journal, as well as earned the cover of Onsite Installer. In 2010 one of our technicians, Alfonzo Pavlicek, celebrated 50 years with the company. You can read these articles here:

75 years is a long time for any business to survive. We are proud of our family business and both Courtney and Chad are looking forward to carrying on the family tradition.