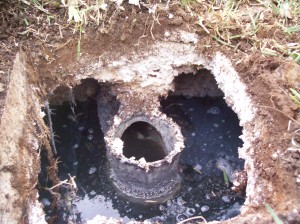 Septic tank corrosion can only be spotted by looking inside the tank, which is usually done during routine septic tank cleaning or for septic system inspections — the lids of the thank have to be exposed and removed.

There are several theories as to what causes septic tank corrosion.

Naturally occurring bacteria in septic tanks excrete hydrogen sulfide gas (causing the rotten egg smell in sewage). This gas naturally stays dormant in septic tanks until a form of turbulence is introduced. When the turbulence is introduced the gas is released and floats in the air space of the tank. Another bacteria—thiobacillus—converts the gas into hydrosulfuric acid, which eats concrete.

Other theories include poor concrete mixes and/or water chemistry.

What are the effects?

Septic tank corrosion can be very minor, or it can cause safety issues which may require the septic tank, or the entire system, to be replaced (your local authority may not allow tank replacement without entire system replacement).

The concrete can become so corroded and brittle that it can create holes through the top of the tank. Occasionally we have seen corrosion so severe that we’ve been able to stick a probe through the lid on the outlet side of the tank.

In our experience, corrosion happens around the outlet side of the tank, above the liquid level.

Oddly enough, Van Delden technicians mostly find corrosion on tanks that are less than 20 years old; they have been installed since the late 1980s when the TCEQ began requiring two-compartment tanks.

This lends some credibility to the theory mentioned above that a two-compartment tank with a shorter dividing wall may be more prone to corrosion because of gas venting.

Can I prevent corrosion?

Although studies are inconclusive, pumping the tank on a regular basis may be the best preventative measure a homeowner can take.

There are many reasons you should have your septic tank cleaned regularly. When your tank is pumped, your service company should check for problems such as corrosion.