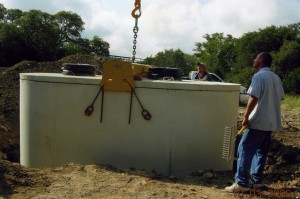 Aerobic systems work differently than their standard/conventional counterparts. In a conventional septic system the solids are separated from the liquids, and liquids are treated in the soil absorption field. In aerobic systems the solids are still separated from the liquids, but the liquids are treated in a series of tanks or compartments and then distributed to the soil either by spray heads or drip emitter piping.

The trash tank/compartment separates the solids from the liquids, just like a standard system does. However, that’s where the similarities end.

Next, the separated liquids flow into the aerobic tank.

“Aerobic” means free oxygen. Aerobic systems have aerators, agitators, or some other components that create this oxygen, which allows aerobic bacteria to digest most of the waste that remains in the water after going through the trash tank. 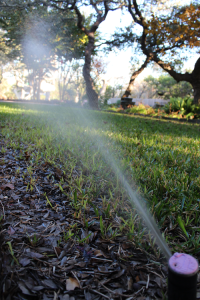 In the last treatment step, liquids flow into a pump tank/compartment. Depending on the setup, the liquids are disinfected either by chlorine tablets, liquid bleach or UV light.

The treated wastewater is usually distributed through spray heads that are connected to the system or through drip emitter piping in the ground.

Click here to see an animation of this process in action.

Why use an aerobic system?

Aerobic systems are very common on the north and northwest side of San Antonio. The rocky soils in the area do not treat wastewater as well as do richer soils, so an aerobic system can be installed to make sure wastewater is treated properly before being let into the soil.

There are many manufacturers of aerobic systems, and every system is designed a little differently. We recommend that you sign a maintenance contract with a company that is certified by the manufacturer of your specific system, and who uses only the parts designed for that system.