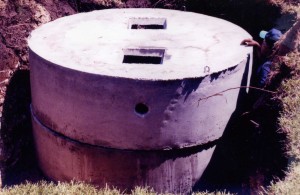 You flush your commode multiple times a day, but do you ever stop to wonder what happens to the water after it disappears? If you live in a rural area, or even some older areas of San Antonio where the city has grown around you—such as Hollywood Park, Hill Country Village, Shavano Park and Castle Hills—chances are you have an On Site Sewage Facility (aka “septic system”), which means the water doesn’t go far.

There are many types of OSSFs, and in this post we will cover how a conventional, or standard, septic system works.

Standard systems have two sections: the tank and the drainfield.

The septic tank is a watertight concrete or plastic tank which serves the purpose of separating solids (waste and toilet paper) from liquids. The wastewater leaving your home flows through a pipe which enters the septic tank. The solids remain in the tank; most will break down over time and accumulate at the bottom of the tank. The same volume that entered the tank then exits the tank through a pipe that carries the liquids to the drainfield.

The drainfield is the most important part of your septic system — it is what treats and disposes of your wastewater. The liquids flow through a perforated pipe and into gravel where they are held as they percolate into the soil beneath the gravel area. The soil treats the wastewater as it moves through.

See an animation of how a septic system works.

The Texas Commission on Environmental Quality is the government agency responsible for creating septic system regulations and laws.

TCEQ’s regulations underwent major revisions in 1997. Systems installed before that year are allowed to remain in use as long as they are working properly and not creating a health hazard or public nuisance.

However, if these older systems fail or need major repair, the entire system is to be brought up to current TCEQ and local authority’s regulations, which usually require a new system. The new system may have to be a different type of septic system due to the regulation changes.

Maintenance is critical to longevity

The average life expectancy of a septic system is approximately 25 years, depending on its usage and maintenance.

There are many factors that can contribute to a failing system, most of them related to the drainfield:

Most septic tanks are concrete and last a very long time. However, some tanks corrode, cave in, or leak.

The most important thing you can do for your system is pump and clean the tank on a regular basis (approximately 3 to 5 years depending on the tank size and number of occupants using the system).

Stay tuned for more information on the different system types and what you can do to keep your system working!